Originally from the U.S. Province, Fr. Tom Fix, SCJ, has been a missionary in Asia for most of his priesthood.  Now a member of the Indonesian Province, he often works for extended periods of time with the formation program in India.  He wrote the following from Aluva, India: 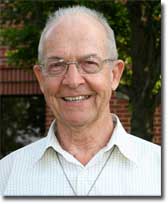 It’s a bright sunny morning here in Aluva, just like it was yesterday. But yesterday afternoon and evening turned up something else: an electrical storm with lots of rain.  The monsoon is taking leave of us with more than a whimper.  However, our students have a different kind of storm occupying their minds –– exam time has arrived.

At table the students ask me if I had much “symbolic logic” in my day, or what I thought of “aristotelian metaphysics.”  I can wiggle out of these two, but not when they ask how much Indian Philosophy we had.  No fair!  But we have a nice library, so I can catch up if I so wish (just like I can learn the Malayalam language, yes, “if I so wish!”  but I think I’ll go back to reading what the Packers did last Sunday…).

All of which points to the things that keep one young while residing in a place monopolized by “yoot” (the way those from my hometown of Milwaukee often pronounce “youth”). We have 40  here this year.  After these first semester exams there will be a break of only six days, during which the two upper classes will go on retreat while the the youngest will take a course on the psychology of personalities (or what we used to call ‘temperaments’).

The larger picture — what the Indian District is up to — has us preparing for the final vows ceremony on December 8 and ordination to diaconate on January 2.  The former will be here in our philosophy house in Aluva, while the latter will move to the theologate in Eluru.  Between the two houses is a train ride of a day-and-a-night.  Already we are booking tickets both ways.  Unfortunately, I’ll have to miss both, since it will be my time to return to Indonesia, where I must wait a two-month interval before applying for my next six-month visa back here.

We are grateful that the young Indian priests are now stepping into roles of leadership and formation, easing the pressure on the missionaries.  Fr. Sunil Roman, for example, just came back from Ireland after finishing coarses in spirituality, coupled with assistance in one of our parishes in Scotland.

That’s all that comes to mind at the moment.  Every best wish and regards to everyone nearby.