A prayer for the students, and the school 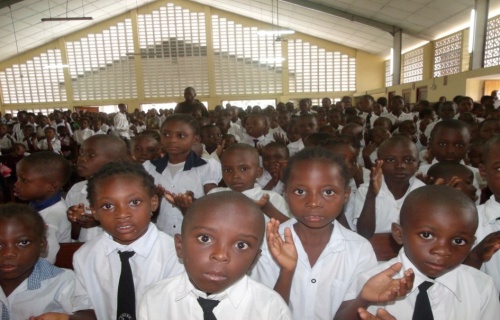 Fr. Egide Safari, SCJ, a member of the Congolese Province, recently wrote about the start of the new school year at one of the province’s schools, St. Clement.

The following is paraphrased from the original French:

St. Clement in Kinshasa recently held an opening Mass, seeking the grace and support of God, for the 2012-13 school year. The principal celebrant was Fr. Élie Muzungu, SCJ, out-going director of the school. [Originally from the Democratic Republic of Congo, Fr. Élie is a member of the Canadian Region; he did his novitiate in Chicago with members of the U.S. Province.]

Fr. Élie urged students to love God, their parents and school, and reminded them of the sacrifice needed to do well in school.

St. Clement School includes three kindergarten classes, nine primary school classes and 14 secondary school classes. Unlike last year, there has been a decline in enrollment, especially in kindergarten. This is because of the difficult social conditions of the country. Parents have to pay the cost of their children’s education. Throughout the school year, students are forced to abandon school because of a lack of funds.

This is hard for the students, of course, but also for the school because it depends upon tuition to pay for much of its costs, including staff payroll and supplies.

And so, we pray and wish for a successful school year for our students, but also for the school itself.

Opening Mass for the new school year at St. Clement’s