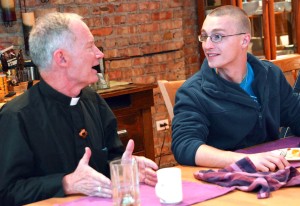 The end of January saw more erratic Chicago weather as the rest of the community reassembled. Fr. John Czyzynski and the novices, Juan Carlos Castañeda and James Nguyen, spent most of January touring province ministries (in the South, of course!). Frater Fernando Orozco spent January at Our Lady of Guadalupe in Houston, and Br. Clay Diaz returned from his program to begin the spring semester at Catholic Theological Union.

Everyone returned just in time for the First Friday reflection, given this month by Fr. Joseph Dinh. It was to be followed by a Come and See weekend. Br.  Ray and Br. Long were to bring three prospective candidates to visit the house and see the program.

Our community meals, of course, are an essential element in community life, and most of them are quite entertaining. Although texting and calling during the meal is verboten, most people have their phones at the ready to Google the answers to questions that arise. And questions arise!

I took some notes during two evening meals, and these were some of the topics that came up:

Everyone shared his favorite horror movies, and we also compared trips that we had taken. There was a discussion about different styles of chewing, and its effect on teeth. We also discussed  different types of relics.

People demonstrated tricks and stunts that they could perform, and we had quite a heated discussion of the various qualities of dogs and cats.

On the scientific side, we discussed the merits of different theories of evolution, and talked about the man in England who has dedicated his life to challenging Einstein’s theory of relativity.

We discussed the danger of coyotes; I showed pictures of my brother-in-law shooting coyotes out of his bathroom window in Maine.  We wondered what is used to fill tractor tires and Br. Duane called his brother, who assured us they were filled with salt water.

On the theological front, we had a debate about what the “sensus plenior” of Scripture referred to, and in response to a question about the grammar of “Sursum corda”, Fr. John Czyzynski did some research and assured us that “sursum” was an adverb.

On another front, we were informed about the details of Mexican superstitions — la llorona, (a ghost which wails at night) and the infamous chupacabra (a vampire which attacks goats).

There were other topics which were discussed, but this is a relative sample of the wisdom and entertainment you will enjoy during a visit to the Chicago formation community.  We have plenty of room and good food and always appreciate visitors.