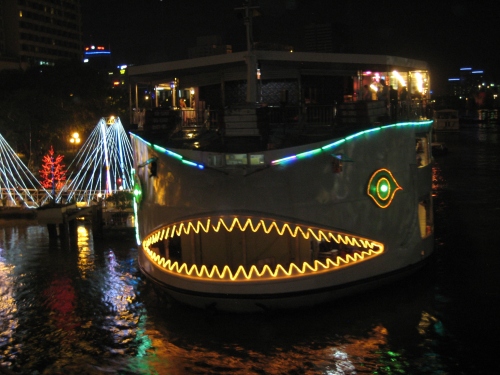 An illuminated restaurant boat on the Saigon River

Fr. Bernie Rosinski took a break from his teaching duties in the Philippines to attend the inauguration of the first SCJ house in Vietnam. In this post he writes with his reflections on the former city of Saigon and the people of Vietnam:

My provincial superior made it possible for me to visit Vietnam the last week in April. As I was already nearby (teaching English in the Philippines), he suggested that I might be invited to attend the dedication of a new construction built for SCJ use. I was duly invited and there I passed one very enjoyable week.

So, what did I enjoy? What are my impressions?  What delightful memories do I retain?

Fr. Tom and Fr. Bernie share a meal in Vietnam

Jumbled and massed together, I would distinguish the civic, external memories from the ones I have of my SCJ colleagues. Together they form an overall pattern of hospitality and warmth that I was totally unprepared for, since I had lived in the era of conflict between Vietnam and the US. Never a soldier, I nevertheless witnessed TV coverage of the events that took place there on a daily basis (thanks to Walter Cronkite and CBS) and surmised that bad feelings existed between our two countries as much for the general Vietnamese population as for the Vietnamese SCJs. I was wrong, absolutely and inexcusably wrong.

Ho Chi Minh City (formerly Saigon) is a beautiful, modern city with many wide avenues and boulevards sided with parks. There are also narrower streets and alleys. Automobiles tend to be mostly taxis, though some people possess their own vehicles. And of course Ho Chi Minh has a system of city buses that works very well and on time. The most commonly used transportation, however, is the motorbike and motorcycle. Entire lanes are given over to them and they reminded me of Brazilian army ants on the move (witnessed on Animal Planet or NatGeo) because they moved together, five or six alongside each other, almost as if they were choreographed. They do not travel at very high speeds. And I once witnessed an entire family of husband, wife, and three children on one motorbike. However, that is not common.

While there are international businesses and banks located in large buildings on the downtown boulevards, there are many smaller businesses and restaurants located on connecting streets. Our SCJ hosts took us to visit some eateries and the menus (with photos and in Vietnamese, Japanese, and English) were overwhelming with the number of choices offered. The food quality and preparation was excellent. One evening, our entire visitor group was hosted on board a restaurant boat that sailed the Saigon River. From there we could see the city skyline and the lighting effects shown on various skyscraper buildings.

Fr. Tom, my provincial, and I toured the Presidential Palace with an English language guide and learned that, on occasion, rooms in this building are rented out to host corporate and civic meetings. I thought it was a good way to reduce the costs of maintaining it and wondered why the White House could not do the same. We also visited Notre Dame Cathedral and other places. While we were seated in the park to rest a bit, two shoeshine boys sought to polish my sneakers.

The same general feeling of benevolence and well-being was present when we visited our SCJ brothers. They fed us, conversed with us, guided us, and accompanied us in taxis to all the places we wished to go. They were eager to practice their English on us; it was a small price to pay to reciprocate their hospitable spirit. Fr. Tom and I resided in a small, nearby hotel. We could walk every day to meet our SCJ brothers.

One response to “Beauty, warmth and hospitality found in Vietnam”