Blessing of the new Mother House in Poland

As noted previously, Fr. Tom Cassidy, now on sabbatical after completing his second term as provincial superior of the US Province, is writing a journal during his trip to Poland. During his sabbatical Fr. Tom is spending time in many of the locations for which he had responsibility when he was on General Council. Next spring he will spend extended time in Asia, helping in the missions of India and the Philippines. Here, writes about the dedication of the SCJs new conference center which the US Province helped to fund: 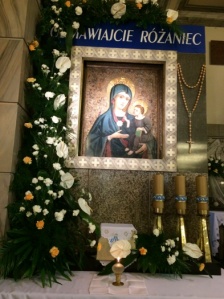 The church next to the newly remodeled conference center has a shrine to Mary: “Blogostawionego Macieraynstwa” according to Fr. Tom.

Today the Domus Mater (Mother House) was dedicated and blessed by one of the auxiliary bishops of Krakow. Originally the cardinal had agreed to be the main celebrant but at the last minute had to cancel and promised to send one of his three auxiliary bishops to fill in for him. In addition to me representing the United States both the German and Franco-European provincials were present as each had contributed to the renovation of Domus Mater as a conference center.

The building is done in what I’d call a “Modern European” style. For anyone who has been to Italy and seen our Villa Aurelia (small hotel adjacent to the general curia) the style would be similar, but with new technological innovations such as electronic keys. There are 33 guest rooms that can accommodate up to 66 people. Of course there are several rooms for meetings and one large hall as well. Part of the building also houses the SCJ community. I believe it numbers 11. In addition there are 10 rooms for elderly SCJs, and in this case I’m thinking more along the lines of nursing care. These rooms are not quite finished.

The morning began with breakfast served from 07:30 to 08:30 and at 09:00 a conference was held in the church. This was necessitated by the size of the crowd attending today’s blessing. The hour-long talk was by a medical doctor and with my all but non-existent Polish went over my head, though I could at last figure out it had to do with the bioethics of human reproduction.

After the conference there was a half hour break to prepare for Mass. Artur, our Polish Provincial, gave an introduction and the Mass then proceeded as usual with the bishop as main celebrant and homilist. Following the Mass, the bishop accompanied by Artur and several others, went about the building blessing it with holy water. After the blessing an excellent meal was served. By the way, I’ve noticed that at big celebrations like this only tea, coffee and juice is served. The laws on drunk driving are very strict with the alcohol level at .02%. As such the slogan: “Don’t drink and drive” takes on a whole new meaning.

After the meal I agreed to meet Fr. Christopher at 2:00 PM for the drive back to Warsaw. There were four of us in the car, but this was a bigger Fiat, more like a wagon then a car so the ride was quite comfortable. Christopher knows a little English but the other two did not. On the walk to the car Christopher apologized for his English saying: I have to translate from Polish into German and then into English. As we began the trip I told him I would listen to a book on my iPhone and they could talk all they wanted in Polish. Actually it turned out to be a quiet trip as the two other passengers spent much of the trip napping.

We arrived back at the provincial house in Warsaw just about at 6:00 PM. The traffic was lighter than I expected. This being the weekend there were fewer trucks on the road, which helped especially along the sections that are still single lanes in each direction.

Unfortunately, in one sense I did not have anytime to tour Krakow, a very beautiful old European city. However, I spent a few days here on my first trip to Poland and have a good feel for the city and its rich history. Tomorrow will be my last trip as Michal Ciemiega and I will travel to visit the famous shrine of Our Lady of Czestochowa.