As noted previously, Fr. Tom Cassidy, former provincial superior, is spending his first months out of office visiting the countries for which he had responsibility when he was on General Council in Rome.  During his travels he is maintaining a journal; several excerpts from it are being posted on the province blog. The following was written on November 14 in Pietermaritzburg:

This morning I left with Frs. Jean Paul and Innocent to visit Marian Hill and then travel south of Durban to visit the Capuchin Sisters for lunch.

The community traces its roots to the Trappists who came to South Africa and established their monastery at Marian Hill. The story goes that they were looking to build on top of one of the hills in the area but when the ox cart broke down their superior said: “We build here.”

Most people know that Trappists live a monastic life dedicated to work, prayer and (certainly in the 19th century) silence. As Marian Hill began to develop, the monks were asked to send men out to teach such skills as reading and writing to Zulu children in the area. As this did not fit the charism of a Trappist, eventually Rome approved the Rule of Life for a new community called Marian Hill whose mission, as it was described to me yesterday, was to go to the margin of society.

The reason I can report all this is that we had a guided tour by a young Marian Hill postulant (someone getting ready to enter the novitiate). He knew his story well and helped us to understand the history of how Marian Hill came to be what it is today from out of its Trappist roots. 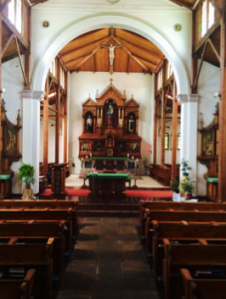 The Trappists who came to Marian Hill came from Austria and it is easy to see the Germanic influence in the chapel. The use of wood is evident throughout as is the choir stalls common to a monastery chapel.

After our tour was completed and we said our thanks and goodbyes it was off to the Indian Ocean and the convent of Capuchin Sisters. We were expected for lunch and managed to arrive almost on time. The Capuchin Sisters are a cloistered community. They are familiar to our SCJs as from time to time they come here for days of recollection or, as will be the case at the end of January, for several days of planning for the new semester and school year.

The community is international in character as their are five sisters from Mexico, some from other African countries, as well as some from around the area. The mother superior is from Mexico and has been here for nine years. Her English was excellent and if I closed my eyes I would be hard pressed to say where she came from or that English was not her first language.

After our lunch we had the opportunity to spend about half an hour with the Mother Superior and a young African sister who had a wonderful personality, full of humor while at the same time filled with down to earth wisdom.

We finally said our farewells, though Frs. Jean Paul and Innocent would be back with the rest of the SCJ community at the end of January, and headed home. We made it back before the afternoon rains and thunderstorm broke over our heads. The day ended with a community gathering to bid farewell to the deacons leaving on Sunday to prepare for their ordinations next month; as well as my own goodbye, as tomorrow I will fly to Johannesburg for my last stop on this journey through South Africa.

The gathering also gave me a chance to thank and say my goodbyes to Frs. Chris, Adam and Ziggy from Hilton who came down for supper and the farewell celebration. I said a few words to the entire group to thank them for their hospitality. I basically told them that like SCJs around the world they practice hospitality well and I felt right at home and at ease among them and especially appreciated the opportunity to pray with them.