More than curry found on the table

As noted previously, Fr. Tom Cassidy is assisting with the formation program in India until the beginning of March. Here he writes a bit about Indian food.

I thought I would spend a few moments talking about food, at least as I have experienced it so far. Most Americans think of curry when they think of Indian cooking, but that’s only partly true. India is a country of 1.2 billion people and like the US, it is a large geographic area. From the warm south as we are here in Kumbalanghy, about 9° north of the equator, to the highest mountains in the world — the Himalayas at 28° north — you can begin to get an idea of its size. Along with its size is the vast linguistic and cultural diversity of the country and with that comes diverse cooking styles as well.

The ocean is only a short distance away, perhaps a mile or two, and since the state of Kerala boarders the sea it’s not at all surprising that fish is an important part of the diet along with chicken. Rice is a staple and is served at the noon and evening meals without fail. I suspect, but have no way of knowing for sure, that rice appears in all the diverse ethnic and cultural groups in the country. Certainly that was the case on my last trip to both Kerala and Andhra Pradesh.

In the few days I have been here there has been a bit more variety at breakfast. A rice and coconut mixture (almost like a powder) frequently appears, serving the purpose of rice at the other two meals. However, we have also had a flat bread resembling a Mexican tortilla in its place and on Sunday a small thick white bread. For this meal there is usually a dish of some time of vegetable based soup or broth that is mixed with the bread or rice. Water and tea are served with these dishes.

The noon and evening meals consist of rice and several side dishes. Fish or chicken are the protein dishes and are accompanied with several other vegetable side dishes. I have particularly enjoyed how the okra and green beans are prepared. Water is the liquid of choice and we have frequently had small bananas to top off the meal. On Sunday we also enjoyed a small cup of ice cream. That, you must eat quickly as it tends to melt rapidly.

I took this photo last evening at St. George’s rectory as we attended the final celebration for the 175th anniversary. As the photo shows, rice is the central dish with, in this case, four side dishes and a tad of sauce on the rice. Two side dishes were vegetables: one much like a coleslaw and the other a mixed vegetable including red onions, carrots, etc. The other side dishes were beef (at the top of the photo) and SHARK at the bottom.

When the dish was first put before me I thought the shark might be a type of bacon — it had both the color and texture of bacon and certainly was fried much as we would fry bacon. After tasting it I asked the pastor what it was and to my amazement he said shark! It was delicious and I graciously accepted a second helping when offered.

As for spices, yes, Indian cooking tends to be on the spicy side. It is not as hot as some Mexican or even Italian dishes I’ve had (at least so far!) but on the other hand practically everything has a tinge of heat to it. And while I may have had curry I can’t say I have found it overpowering or for that matter, bring it to mind as I think of the dishes I’ve enjoyed to date.

As for my eating habits I eat the food put before me. If it’s a fish dish I usually take little as the fish comes with bones included and I’ve not mastered the art of deboning the fish before putting it into my mouth and as a consequence have to be a bit careful when chewing it.

Eating with your hands is a common method here and according to all, the preferred method at home. However as this is a seminary and which is preparing the students for a future life that will encounter other cultures and worlds in one form or another utensils are used at the noon and evening meals. It makes for a noisy table much more so than in the States. The plates are made of metal (hard to break) and with the pushing of rice and side dishes together unto a fork or spoon makes for a racket when 20-plus are doing it all at the same time.

Let me close with one word about last evening’s closing celebration at St. George’s. We arrived as the speech making was coming to an end. That was fine by me as I would be at a loss for what was being said. I do know the bishop of Cochin and local politicians were among those scheduled to speak. 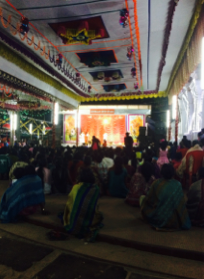 The highlight for everyone was the two acts which brought the evening to a close. Both were in a sense morality plays. The first was about the relationship between a father and his son and how important respecting your parents is as the tables can turn and the child one day may take care of the parent.

The second was harder for me to grasp but I was told it had to do with doing your part to make your parish a better place. This one had a lot more dialogue and that made it difficult to comprehend. I will say that the acting (all members of the parish) was quite good and though I did not understand the lines they were delivered with professional skill.