Reflecting on time in India 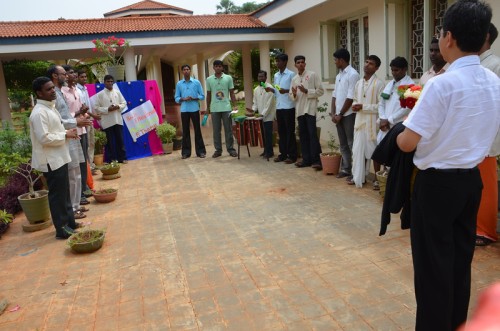 As noted previously, Fr. Tom Cassidy spent much of the past two months in our Indian District. What follows is his final reflection on his time there, written upon his return to the United States:

I want to take a moment to reflect briefly on my two-month sojourn to India. First of all, let me note these are my own personal reflections and while I tried to be as truthful and accurate as possible in these blog posts, from time to time misinformation has slipped in. Perhaps this is another way of saying that you’re seeing India through the eyes of a tourist, a stranger to its life, culture and customs.

A wise Dutchman, Fr. Case van Passen, SCJ, a missionary in Indonesia for many years, once told me that even after 20-plus years in Indonesia each day brought with it a surprise. It took me some time to truly understand what he was trying to say, but I agree with his observation. Unless you are born into a culture and steeped in its traditions and ways from birth there are aspects to that culture you’ll never fully comprehend.

After two months in India, and this being my second visit, I do have a better sense of its life. India is a vast country composed of many languages and cultures. In fact, as I have said on more then one occasion, I marvel that it has been a functioning democracy for over 60 years. That is not easy with such a diverse population. Perhaps being a land of ancient culture has provided the glue to hold it all together. While there are differing cultures, languages, customs and foods there seems to be an underlying cultural unity to it all.

Religiously, the country is dominated by Hindus. I was struck by the fact that while there are 150 million Muslims (one of the largest populations in any single country) it is but a small percentage out of a population of 1.2 billion people. Christianity and more precisely, Catholics, are a much smaller percentage, about 1.6% in 2009.

However, Christianity is not a “Johnny-Come-Lately” to India. Indians trace their faith to the Apostle St. Thomas. One of the highlights for me was the opportunity to celebrate Mass at his tomb where he is believed to be buried. It’s located in the coastal city of Chennai.

Religious tensions are not unknown in India. One of the factors to pay attention to in the upcoming parliamentary elections is the strength of the Hindu BJP party. There is a real possibility they will take power from the Congress Party and will have the opportunity to form the next government. From what I have read and been told, most likely, given the number of parties vying for seats, neither the BJP or Congress will gain enough seats to form a government on their own and will thus have to bargain with the small parties to form a coalition government. That may be best hope for religious tranquility for the next five years.

I spent most of my time at our theological house of studies in Eluru. It gave me the opportunity to know both our current first and second year theologians and the postulants heading for the novitiate. I thoroughly enjoyed living with these young men. They were most receptive to my presence and made me feel right at home. I was reminded that hospitality is a hallmark of SCJs. What I marvel at in this regard is, to the best of my knowledge, no classes are offered anywhere in the congregation on hospitality but we sure do practice it.

I was impressed with the quality of these men, both the theologians and postulants. It amazed me how easily they get around from place to place via public transportation. If I have one regret it would be not having the opportunity to use a bus to travel from one place to another. Several times we had trips from Eluru to Nambur or Guntur and lacking vehicles to carry us all many would use public transport (an auto rickshaw from our house to bus station, etc.) to get to our destination.

This year marks the 20th anniversary of the SCJs arrival in India. Circumstances have thrust the responsibility for their growth and success on to their shoulders. Just what the future might look like only God knows. I was interviewed by Fr. Vilmar, SCJ, for The Mustard Seed, a publication of the Indian District, and in that interview I said that I believe something the Indian SCJs have to figure out is: What do they want to be known for? Or to put it another way, when someone asks who you are and you say “I am an SCJ” or “I am a Dehonian” will they readily recognize who you are and what you do?

Let me close by saying how privileged I feel for having made this journey; it has indeed been a blest time for me. I learned a lot and hope in turn that my presence was of value to them. I do believe that by rubbing shoulders with one another for two months something of me has rubbed off on them, and I know something of them has rubbed off on me.