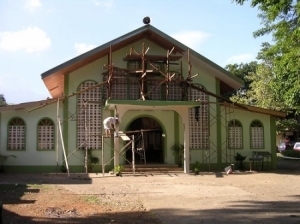 The parish church in Dumaliano

As noted previously, Fr. Tom Cassidy, SCJ, is in the Philippines assisting with the English program for SCJ students. Today he posts from Dumalinao. Also, Fr. Tom has been doing interviews with his students. They are being posted on the US Province website as they are written. Click here to view them.

Getting used to rainy season

It’s now 7 p.m. as I sit in the dark before my computer. Our electricity has just gone off and I’m waiting for their new generator to kick in. I think yesterday was the first time they used it, and it functioned well when the power went out. I’m told that losing power is rather common around here even more so then what I experienced in Cagayan del Oro. I think we all have to give the power company some slack on this one as we have had a constant heavy rain and thunderstorms for the past three hours. They’ve now ceased and once again you can hear the insects of the night.

Today was the first of our celebration days. This morning at 9:00 we had the Religious Profession Mass with Fr. Frank Pupkowski, SCJ, as regional superior, the principal celebrant. One other important person to note Fr. Rino Venturin, SCJ, the district superior of Vietnam. Our Vietnamese students study both philosophy and theology here in the Philippines.

Because this week also marks the 25th anniversary of our presence in the Philippines a number of SCJs from around the congregation, including several provincials from Europe, were also present today. In the group making their final profession were four Filipinos and two Vietnamese while all five of those making first vows were Filipino. The entire ceremony lasted about two hours and was followed by a meal held on the novitiate grounds. Fortunately the rains did not come until later in the day allowing us all to eat in comfort. Because of the large crowd the meal was catered by a local company that I presume came from Pagadian.

I would love to show you pictures of the vow ceremony but somehow my pictures did not appear in the iPhoto app and I’ve been deleting photos off my phone when I transfer them. Alas I’m afraid their lost forever. Too bad as plenty were taken with the help of Fr. Khoa Nguyen, SCJ, my travel companion from Cagayan del Oro who had a better vantage point to take pictures this morning. I will try to see if I can scrounge up a few photos from one or the other photographers in the house.

I managed to finish my walk just before the rain began a little after 3:00 this afternoon. Staying at the house is the young niece of Fr. Arthur Guevarra, SCJ, who followed me around on my 90 minute walk, well at least for some of it. 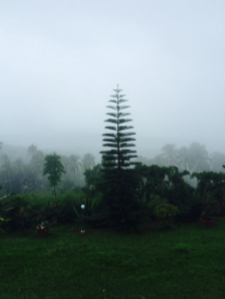 Today’s rain was the first of what I would consider to be a typical day in the rainy season. Heavy rain for a time with thunder and lightning to accompany the storm. If there is one difference I noted there is not the strong wind we often associate with thunderstorms in the Midwest.

Tomorrow morning we head to Kumalarang for a 9:00 Mass to kick off the feast day celebration. It is the last of the original three parishes that we SCJs still staff. It is about an hour from here by car. Last evening many went to Margosatubig for a dinner given by one of our former parishioners. As I had just completed a six-hour car ride to get to the novitiate I opted to stay home and rest. Magos and Dimataling were two parishes we had to give up some years ago at a time when some of the rebel groups were kidnapping foreign nationals for ransom. This step was taken after one of our own priests, Fr. Giuseppe Pierantoni, SCJ, an Italian, was kidnapped and held for close to six months before being released.

One response to “Days of celebrations begin”