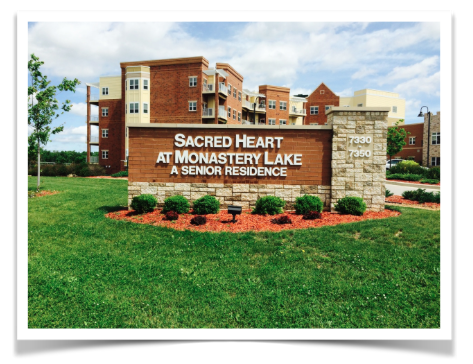 Fr. Tom Cassidy’s final blog post about his recent visit to Asia was written back at home, at Sacred Heart at Monastery Lake:

This will be the final journal entry as my visit to the Philippines and Vietnam came to an end yesterday afternoon when United #882 touched down at Chicago’s O’Hare Field and I began the final journey to my SCJ community residence you see pictured above. My day began in Manila as we departed for the airport at 05:30 local time. From there I would fly 3+ hours to Tokyo’s Narita Airport, and then 11+hours from Narita to Chicago, ending it all with a 90 minute bus ride back to Milwaukee.

It’s now actually Wednesday (06/08/14) as I took a nap in the afternoon and stayed in bed until 03:00 this morning. I may have been able to go longer but Mother Nature was putting on a pretty good thunder & lightning show outside my bedroom window. I think with that long sleep my body clock is now in sink with the Central Time Zone and I should be able to follow the normal schedule around here.

In the next couple of days I will put together a report to the provincial and his council on my sabbatical year. In brief it was more then I could have hoped for and then some. For me the high points were my time in India and the Philippines working with young men who either were preparing to enter the community (pre-novitiate) or as in Eluru, both professed theologians and the postulant class that entered the novitiate last April.  I had extended stays that allowed me to get to know the local situation and personnel and in turn they got a good sense of who I am as well.

With the exception of Indonesia, where the Dutch SCJs began their mission in 1923, the other Asian SCJ entities are much younger. The SCJs began in the Philippines in 1989, India about 1995, and Vietnam around 1998. The US Province has had a close relationship with all four. We had several American SCJ missionaries in Indonesia, including Fr. Tom Fix, who also worked in India before his death, and Fr. Mark Fortner, who is now retired and living in my community — he was also a novitiate classmate of mine.

The US Province helps to financially support India, Vietnam and the Philippines and often assists Indonesia when requested to do so. In particular, the US Province has sponsored a number of Indonesian SCJs for studies here in the US. Because of all those connections I have a keen interest in what is taking place in our Asian entities.

I first visited Indonesia in 1989, and was taken by what I can best describe as a stateliness in their culture. I have been back several times since and technically will complete my sabbatical year in October when I will visit Indonesia for three weeks. Because of my extended stays in both India and the Philippines it was not possible to work it into the year allotted for my sabbatical.

The sabbatical was truly a time of grace and growth for me. In its own way it was a spiritual experience, a long retreat if you will. I had the time and opportunity to reflect and pray and learn from observing the world as seen through Indian, Vietnamese, Filipino, South African, Irish-Scotish-British and Polish eyes. We all do the same things, but culture and custom gives a twist to how, when and why things are done.

Perhaps this is not the best example, but it will get my point across. When it comes to meals, some use their hands, some use chopsticks, some use a fork and spoon, and some use a fork, knife and spoon; the method may vary but the object is the same, i.e., how to feed oneself. One can argue which method is the best, but in the end they all accomplish the same thing. I use a fork, knife and spoon because I was born into it. I have learned how to use the fork and spoon, chopsticks and yes (though still not good at it) how to eat with my hands.

A small matter to be sure but there are so many other things and experiences about living and visiting other cultures and other worlds. In the end they help make you a better person who has a deeper understanding of his/her own culture with its strengths and, yes, its shadow side as well. Ultimately travel is one of the schools we all should attend if possible — it’s a great education.

2 responses to “Back home”