Our novitiate in the shadow of Mt. Tanggamus

Mt. Tanggamus can be easily seen from Gisting, location of our Indonesian novitiate.

November 14, 2014 – I’ve arrived at the last stop of my Indonesian journey before returning to Jakarta next Tuesday in preparation for the trip home. After two days in Metro it’s time to spend the next four days at the SCJ novitiate in Gisting. I specifically asked to spend a few days here as on all my other visits (I think this is my fifth) it was “hello-spend-a-night-and-goodbye.”

Fr. Kus and Br. Antonio drove me here this morning. We left Metro about 8:30 am for the three-hour journey. The roads weren’t bad (though for the most part a single lane in each direction ) and the traffic presented few difficulties. Along the way we passed the airport I’ll use on Tuesday to fly from here to Jakarta. 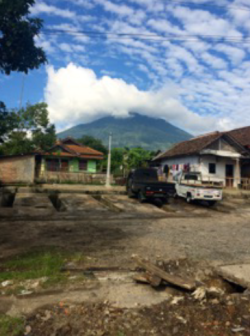 Looking at the mountain from a Gisting neighborhood

Gisting is located at the foot of Mount Tanggamus and is well known as the ‘village of a thousand springs.” I’ve tried to find out how high it sits but the internet isn’t cooperating at the moment. It is safe to say the trip from Metro to Gisting is an uphill climb. It is not a large city but a village that hugs the highway. It has been important to the SCJs for many years. A fair number of members of the Indonesian Province come from here. Fr. Sunardi, SCJ, who just recently earned his doctoral degree from Marquette University in Milwaukee calls Gisting home.

In addition to the novitiate, the SCJs staff the local parish and several years ago built a retirement community that unfortunately, not many senior SCJs prefer to use. It does not sit idle though as it is frequently used for retreats and as a conference center. I am staying there as the novitiate is filled. I was under the impression that it had hot water but was disabused of that fact when I took a shower after my walk this afternoon.

There is no room in the novitiate because this year they have 16 novices and 10 postulants which has greatly limited their guest room space. In turn, that will greatly increase the number of scholastics at Yogyakarta when the current novice class of 16 make their first profession of vows and head off to their philosophical and theological studies.

I don’t plan on climbing Mt. Taggamus, but it is a pretty site to see as I look at it out my window. Gisting itself offers a walker the choice of walking uphill on the way out of the novitiate grounds and downhill upon return or just the opposite if that be one’s choice. Threat of rain kept me walking on our grounds today, but tomorrow for sure I’ll venture out as rain tends to come in the afternoon so I’ll head out sometime after breakfast to see what Gisting may have to offer. 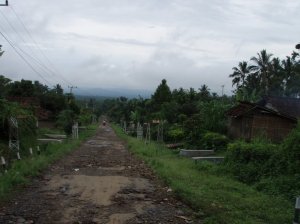 One of the less traveled roads of Gisting.

November 15, 2014 – This morning I took my walk exploring some of Gisting. I ran across a spring by sheer luck as when I turned right out of the novitiate’s main gate I was confronted by a Muslim School marching up the street and at the nearby corner it became impossible to head down the hill so instead I turned into a side street and found this stream in the process. By the way, I still have 999 others to find in the next three days if I’m to believe Gisting is indeed the village of a thousand springs.

The morning was quite pleasant with a temperature of about 85° and sunny skies. That would not last as this is the rainy season and the clouds build up so that by lunchtime the skies are gray and threatening and the rains come sometime during the early to mid-afternoon hours.

The virtue of taking the side road in addition to discovering a spring it allowed me to see some of the local housing, and scenery plus no traffic to speak of. I also found a few fields of rice and what looked like grape vines but I’m sure was a bean plant of some kind. I am told grapes are grown in some parts of Indonesia and given Gisting’s milder climate it might be grown in this area as well. Around here it is common to get two crops of rice in a normal year.

In addition to rice and beans corn for human consumption is a common crop as is palm oil and cassava. Then there are the many tropical fruits. Alas many of which we never see or taste in the States. I’m missing two of my favorites because they are out of season: duku and rambutan.

Tomorrow I will try to wind my way down to the traditional market now that I know where it is located. It is fun walking the streets standing out like a sore thumb. I don’t think they see many western tourists so stares are common along with the desire by young and old to use their smattering of English.

A worker in the SCJs’ candle factory

Gisting wasn’t the only thing I explored today I nosed around the novitiate as well. This morning the novices and postulants finished a course in journalism. It’s a regular part of the novitiate curriculum as journalism is an important ministry of the SCJs. Judging by the laughter coming out of the classroom the novices and postulants were having a good time. I found out at lunch the highlight this morning was viewing the two funny videos the students put together as their projects.

I also spent time at the small candle factory just behind the main building. It’s a small way to help support the novitiate. It keeps food on the table! The factory has one full time employee and when things get busy and extra hands are needed some of the other novitiate staff will assist. I think from time to time the novices and postulants also lend a hand.

The candles are for liturgical or religious use. With Advent just around the corner they are busy putting together packets for Advent wreaths. I’ve been promised two sets to bring home with me to the States. The novitiate use to also raise coffee but no longer does so.

By the way, Sumatran coffee (in this case Lampung coffee) is a robust brew. It sure beats the instant coffee that is so common in India since tea is their preferred drink. Now this is how you brew a cup of Sumatran coffee.

1. Put your desired amount of coffee in a cup or glass. The coffee grounds must be extremely fine— almost a fine powder.

3. Allow the coffee to sit for a few minutes.

4. Just before sipping use a spoon and give it a good swirl.

Now you would think you’d be eating coffee grounds but because the coffee is so fine much of it is absorbed by the water and the rest settles to the bottom. I like a strong cup of coffee and have enjoyed three or four cups a day while traveling Indonesia.