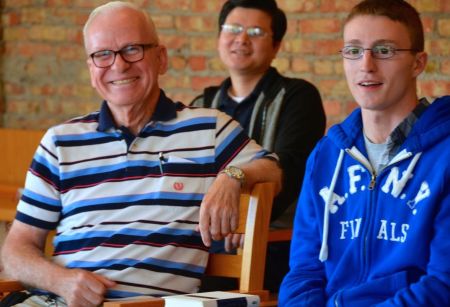 Fr. John (left) smiling during a community meeting with the Dehon Formation Community in Chicago last fall. The retired novice master has served in formation during most of his 51 years of priesthood.

This week I have classes with the postulants (seven young men).  We meet in the morning for what is scheduled as a two-hour session, but is usually a bit less. I am doing some things on Fr. Dehon, SCJ spirituality, self esteem, and Marian devotion. When we talked about Fr. Dehon and I asked them to tell the group what appealed to them about the founder. It was interesting to hear how they came at that from all different points of view.

It started to rain during the sessions and one of the guys charged out of the room. I asked what was going on and was told that it is his job to get the laundry off the lines so it does not get soaked by the rains.  Thank God for dryers in the United States!

The rain has not been severe but steady for about five or six hours.  They have a interesting system of canals to drain off the water and get it to flow into the river the town is named after:  Cagayan d’ Oro (“River of Gold” — though it looks more like mud than gold). The ground is so moist it can’t absorb any more.

Several guys have asked me to help them with pronunciation of English.  One of them was pronouncing some words with a British pronunciation and I said that is not incorrect so I was not correcting him, but we say those words differently in the United States.  He said: “correct me.  I want to speak English the way the Americans do.”  It reminded me of St. Albert speaking of St. Thomas and saying the student would surpass the teacher.

There are about 45 seminarians here, four novices and 15 in the post-novitiate program in Manila (Quezon City). They are pretty evenly divided: Vietnamese and Filipinos.