With this being vacation time the scholastics spend more time at work, and work right now it is concentrated on the front drive and small plots of land in front of the refectory for grass and flowers. Currently there are 10 students in the house though all but three of them will leave next week to begin either their vacation or their 20-day pastoral experience. Some of the students who left on April 1 will return to keep the work force up. The returning group is splitting their ministry time from their vacation time. They began their ministry time helping out during Holy Week and with the Indian custom of house blessings following Easter.

After eight or ten years in the seminary system the students pick up all sorts of trades and skills. Some have learned a lot about electricity and technology, while others carpentry and masonry and still others cooking and hospitality skills. Some, given their physical size, are usually the first given work requiring strength — some might call that the grunt work! 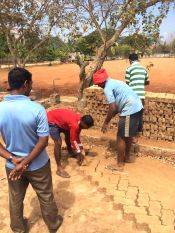 Fr. Mariano has spent lots of time over the past year or so working on the grounds. Right now he’s trying to level part of the front drive by removing the paving stones to even out the ground and then putting the puzzle back together. While this is going on Brs. Manu and Ajith, who have masonry skills, are building border areas for several small plots in front of the dining room destined to house plants and perhaps grass.

Sometimes when I think of India I think of headgear. If you mention the word “Sikh” almost everyone would picture in their mind’s eye the turban worn by Sikh men. Mention the word again in the same breath with India and some might think of the towel some men wear when they are working. While there are many reasons why a man would choose to use headgear, for example the Sikh using it for religious reasons, the hot Indian climate is inducement enough to warrant something to either offer protection from the sun or perhaps to keep sweat out of one’s eyes.

One of the drawbacks of work during the summer vacation season is heat. From about 10:30 am to 4:00 pm it is often simply too hot to work, or at least to work with any degree of enthusiasm. One of its few advantages on the other hand is that there are very few days where outside work is called off because of rain. Rain won’t be a problem until June or later depending on when this year’s monsoon season begins and, in any case, it won’t start until after the school year has begun and the time for work is greatly reduced.

There is one daily compensation enjoyed by the brothers, or at least by the sports enthusiasts among them, and that’s the nightly cricket match on television. The Indian Super League has begun play. The season lasts two months and features a set game that takes about three hours to play (a far cry from the Five Day Test Match!). Many of the major cities have teams consisting of Indian and international professional cricket players. Each team is limited to four foreign players.

The brothers each have their favorite team and since practically all of them come from small towns and villages their choice of team is often determined by what Indian or world star they admire. Last night Br. Franklin was the lone rooter for the Mumbai Indians in its match against Rajasthan Royals. Sadly for Franklin, to quote the Deccan Chronicle: “Mumbai Given A Royal Beating!”

As for me when I’m asked who do I follow? I tell them: Why Chennai, of course, we have a ‘house’ there!