Former provincial superior on the road as general councilor

Fr. Stephen Huffstetter, SCJ, begins his first full year as a member of the General Council with the first visitation of the new administration’s term. The former provincial superior of the US Province joins Fr. Heiner Wilmer, SCJ, general superior, on a visitation of the Indian District. This is Fr. Steve’s first visit to India. He shares the following:

Fr. Heiner last visited India 11 years ago, and many of the SCJs fondly remember the time he spent with them. This is my first visit. When we landed at the Chennai airport we were greeted by five very young Indian SCJs. I might have thought they were students, but I recognized them as members of the District Council and administration team. India is a young and growing district, and it is important to support people placed into key roles before they have had the seasoning that comes with years of experience.

Chennai experienced massive flooding a month ago, and on our way home we saw remnants of refuse washed into piles along the river channels and spilling over into neighborhoods. Some areas of poor homes on the most vulnerable lands washed away completely, with several hundred reported deaths. The SCJs had to leave their house for several days, then spent many hours cleaning and re-cleaning to make the building habitable again.

I was surprised to see how many cows roam the streets; you have to avoid them in traffic as well as pedestrians, auto-rickshaws and the constant flow of motorcycles. Many still had colorful painted horns from a recent Hindu festival.

When we traveled early in the morning I noticed a large number of people sleeping on the sidewalk, homeless and taking on the most difficult and lowest paying jobs in order to survive.

We spent our first full day with the District Council and listened in on their perspectives and ordinary business. They face dual challenges of financing their projects, and providing well-trained people who can help those projects flourish. Many of the parishes we serve are in poor mission areas. While we are proud that they are consistent with our SCJ mission focus, they are unable to be financially self-sufficient and require support from the district and grants from abroad. Thankfully, we have had generous help from other provinces (including the US Province) and from our benefactors. A goal of the council is to work toward greater financial stability within India, which will take some time.

Fr. Heiner encouraged the Indian District to find and articulate its own identity. As our presence develops, what will we as Dehonians in India be known for? 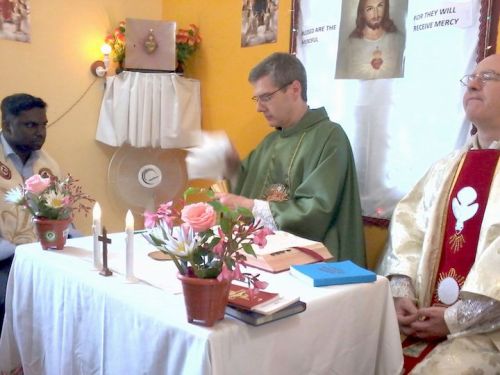 On Sunday we concelebrated mass at Christ the King, a parish substation where SCJs often help. Mass was in the Tamil language, and even with a booklet, I couldn’t follow the alphabet containing more than twice the characters that I am used to. Men and women sit on opposite sides of the church, on the floor. Like everyone else, we left our shoes at the church entrance. Flowers and incense were present in abundance, and we had great participation from the assembly. A homily in this part of India is expected to last for at least a half an hour. At the end of mass people flocked forward to ask for a blessing, especially from we foreign visitors.

After two days of meetings we took a break and paid respects at the Basilica of St. Thomas, where the Apostle is buried. In prayer I asked the Lord to see me through my time of doubts, and lead me to a greater faith.

Next we walked to the beach and looked across the magnificent Bay of Bengal. First we came to the area where fishermen and their families live in very basic housing, often canvas stretched over a few wooden boards. As the boats returned, women sat by the road, cleaning and selling the day’s catch. We continued to the wide sandy expanse that we were told is the second largest beach in the world. Many families were out for picnics, playing Frisbee, buying treats and playing carnival type games. I found it odd that with thousands of people everyone wore street clothes. I did not see anyone swimming and only one child had on a bathing suit. Maybe because it’s “winter” and only 75 degrees!

Each time we reach a new SCJ house we experience a traditional welcoming: greeted by song, garlands of flowers, and marked on the forehead with soil from the Indian subcontinent. Then we are handed a coconut to drink. Most of the time a hole is already punched in the top and a straw inserted, but I also learned how to open a young coconut by dashing it against a rock.

We have visited three of our formation houses so far. I have heard many stories over the years from members of the US Province who served here for a time in order to build up the district, and smiled when I saw the “Thomas Garvey Memorial Study Hall” in our philosophy house in Aluva. I am a product of SCJ minor seminaries, and started my affiliation with the community at the age of 14. Seeing men as young as 16 playing soccer and basketball, and beginning to discern if God is calling them to religious life and the priesthood brings back memories for me.

In each of the houses the students presented programs of song, dance, music and poetry. One of the students told a few jokes to warm up the crowd and another showed his juggling skills. The dances are energetic and entertaining, just like the ones from a Bollywood movie. Always there are words of thanks and gratitude. People say they are honored to have us here. It is an honor for us to be here among these thankful and grateful communities.

In Aluva for India Republic day, Fr. Heiner reflected how the search for truth was so important to Gandhi, and an essential part of the life of a student. After mass we had a flag raising ceremony. When the flag reached the top of the pole and unfurled, fragrant flower petals floated to the ground.

Fr. Heiner has held Q and A sessions with all of the students. They enthusiastically gathered around to ask questions like,” What would you have been if you hadn’t become a priest, what are your hopes for the Indian District, and why do we have to do 14 years of formation in order to become a Priest of the Sacred Heart?”

Food is tasty and flavorful, though spicier than I am used to. The combination that works best for me is heavy on the rice and light on the curry. Fish is quite common, and being so close to the sea we have been served many shrimp, crab and fish dishes.

The land we have seen so far is green with vegetation. The philosophy house grows bananas, coconuts and tapioca, raises ducks for meat and cows for milk. Their fish pond also helps to feed the always hungry collegians.

A couple of mornings I was awakened at 5:00 by the blare of loudspeakers from a nearby Hindi temple. Christians are a small minority in the country, but have a strong faith and high rate of church participation.

The aspirant program is in Kumbalanghy in our first house, founded in in 1985. It contains a Portuguese chapel dating back to the 1500s and a good crowd of local people join the community for daily mass.

One of the main purposes of Fr. General’s visit is to meet with individual community members. We learn who they are, and ask how they see the district’s strengths and challenges. We specifically ask what their dreams are for spreading the charism of Fr. Dehon in this culture.

This entry was posted in Fr. Stephen Huffstetter. Bookmark the permalink.