Serving the poor of Argentina 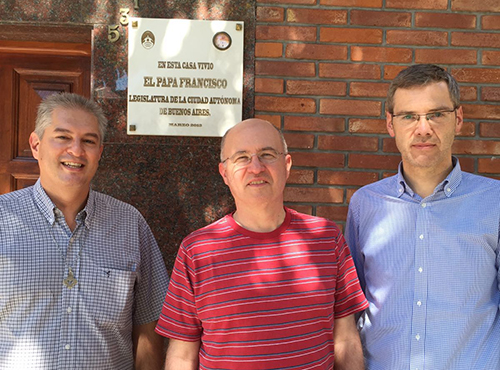 Fr. Stephen Huffstetter shares his journal from Argentina, where he and Fr. Heiner Wilmer continue the general visitation:

The SCJ parish of Sagrado Corazon serves a large barrio in Buenos Aires. The church and rectory complex is big, with a school attached, and at one time served as a formation house for the province. The parish takes in a huge area of high-rise low-income housing. They reminded me of projects I saw in Chicago, where concentrating the poor in one area without many support services was a recipe for crime and failure. Because of past theft, and ongoing drug violence, the parish has to be barricaded with locks and iron bars across the gates. When you are committed to working with and among the poor, that can be a sad fact of life.

We traveled north to the Province of Chaco. The landscape of vast plains, grasslands, and groves of palm trees reminded me of a cross between Texas and South Dakota. We drove a narrow two-lane road which stretched for miles cross-country. The side roads were gravel or dirt and we passed few towns (or gas stations) in along the way. We definitely saw more cows than people, and the occasional Vaquero on horseback, tending to the herd.

Four SCJs minister at San Martin. The parish complex is large, with one of the buildings meant for retreats and province gatherings. Our first night a surprising 80 folks showed up for the weekday mass. A young woman just turned 15 and her family came to church for prayer and a blessing as she celebrated her Quincinera. Even on Sunday the main parish mass is at 8:00 pm, after the heat of the day. The priests travel to the outlying mission chapels up to 50 kilometers distance during the day. Fr. Heiner presided and preached on the weekend. After mass people lined up for his blessing as if the Pope had come to visit. Each country has its own way of greeting. In India people tended to bow with folded hands. In Argentina, everyone kisses you on both cheeks.

After mass, we were treated to supper in the parish hall, honoring a group of young adults who had just finished their summer bible program for the outlying communities. I was impressed with the strong involvement of youth in the life of the parish. They and other parish groups told of their work and life in the community. As a gift they presented us with Pope Francis’ favorite beverage, mate leaves, and a special cup from which to drink it.

We had the opportunity to visit families of SCJs, and thank them for nurturing their sons’ vocation. One priest and two seminarians come from the San Martin parish. Vocations are inspired first from the Lord, and secondly through parishioners who evangelize, catechize and nourish the faith through prayer and outreach.

We drove to the town of Formosa, and crossed the Paraguay River into the town of Alberdi. The SCJs have recently opened a new mission in this part of Paraguay. The river is about a half mile across, and boats constantly shuttle back and forth for work or shopping for bargains at the colorful marketplace at the landing in Alberdi. After we went through customs, we boarded a wooden boat that held about 50. I expected Humphrey Bogart to take the wheel of what reminded me of the African Queen of movie fame. The river was swollen with three months of heavy rains, including another soaking thunderstorm that knocked out the electricity the previous night. On the crossing we saw buildings close to the bank that were flooded, and sand bags keeping the waters at bay.

Two SCJ priests, Mario and Caesar, serve the parish in Alberdi. During the rainy season they are unable to reach some of the missions because the roads become impassible. Upon our arrival the group of 15 parishioners who are pastoral animators had a meal waiting for us. Besides sampling tasty local dishes we they shared their efforts at sharing the faith, and their appreciation of SCJ presence. I came away impressed by the lay leadership of these committed people. In his remarks, Fr. Heiner put in a pitch for vocations from the area. In order for new missions to sustain themselves, local vocations are crucial.

As we left San Martin and drove south, we came upon a very moving Memorial to the Martyrs of Margarita Belen. Twenty-two larger than life sized statues depicted people blindfolded and chained, meeting their death by gunfire. The memorial commemorated the 1976 massacre of supporters of the Montoneras, killed by military forces during the systemic violence of the dirty war in the years when so many people disappeared.

Frs. Juan and Marcelo serve Resistencia, the capital of the Chaco Province with a population of 400,000. The central part of the city is quite nice, with wide boulevards with trees and green space in the median. The part of town the Dehonians serve has primarily dirt roads, badly rutted from recent heavy rains. I often heard the clip clop of horse hooves as the charitos clomp through the streets, wagons still much in use to haul produce or garbage or whatever materials needed for work or home improvements.

Fr. Juan took us on a tour of the town. On the flood plane of the Rio Negro, it is illegal to build, but many poorer families have few other choices, and form a village of corrugated iron huts huddled together. The “parish” has 10 chapels and serves a flock of 50,000. Several of the chapels are close to the main parish, which others are on the expanding outskirts of the city. As the area grows, the bishop would built a new parish but has no priests to send, so the workload of our two dedicated men continues to expand. They place lots of effort on training catechists and lay leaders. The parish social outreach is done through Casa Betania, a drop in center for teens after school, where they can find help with their studies, a safe place for recreation, and a nutritious meal. The house also serves as a domestic violence shelter, and stocks clothing for families in need.

We also took a quick trip to Corrientes, an even larger town 15 miles away. Corrientes is older and with many colonial style buildings. The SCJs are exploring the possibility of a new mission in campus ministry somewhere in the region. We crossed the Rio Parana over a long bridge, perhaps a mile or more across, like the Mississippi River. We saw plenty of barges hauling grains and goods down river, and vacationers enjoying holidays on the wide beach.

In the southern hemisphere, summer vacation is winding up, and school is starting again. We attended the opening school mass for the “Semanario Inter Diocesano de la Incarnacion.”  Six of the area dioceses work together to educate some 70 seminarians. Our Fr. Juan teaches sacraments in the school, continuing the Dehonian emphasis on formation of the clergy. The mass was held outdoors, on the soccer (football) field. Nylon stringed classical guitars pounded out an uplifting beat and the harmonies of seminarians made a strong statement of faith. The bishop of Corrientes preached about a dynamic spiritual life, where we all must Eshucar (listen), Obedecer (obey), and Caminar (walk) on our journey toward God. The 12 new seminarians reminded me of another group of 12 apostles, who accepted their limitations and used their talents to spread the good news.

We had two notable evening meals. Fr. Leo, the Argentine provincial and our host, is from Resistencia. His family invited us to share a meal with them in the parish hall. Our second evening we were invited for mass and a cook out with the Companaia misionera, a group of lay Dehonians who have dedicated themselves to full time mission work around the world, and has a small but significant presence in Argentina. They had just finished their annual retreat. Some of the Lay Dehonians from the area also attended. I appreciate how people from all walks of life draw inspiration from Fr. Dehon.

Our last day in Buenos Aires was a day of integration and relaxation. For the first time on the trip we had a chance to play tourists and headed for the barrio La Boca, Colorful houses, once the homes of port workers, now house arts and craft galleries. Streets were lined with cafes where couples danced romantic Argentine Tangos to the delight of onlookers.

We passed through the Plaza de Mayo. Impressive government and cultural buildings and monuments surround the city’s main square. The Plaza also recalls a sad chapter in the country’s history when the mothers of those who “disappeared” at the hands of the military dictatorship came each week to pray, witness, and rally support for their cause.

We closed our last day with evening mass. The Gospel of the day was the story of Lazarus and Dives. Many poor people have crossed my path on this visit: the man washing car windows with a squeegee, the elderly woman with no teeth who begged while we ate ice cream, the teen girls seeking refuge at Casa Betania; and the tattooed man with knife scars across him arm. Our SCJs in Argentina and Uruguay are constantly put in contact with those at the margins. I have been inspired by their willingness to reach out in a spirit of misericordia while serving the needs of God’s people

This entry was posted in Fr. Stephen Huffstetter. Bookmark the permalink.

2 responses to “Serving the poor of Argentina”