Celebrating Triduum and Easter in India 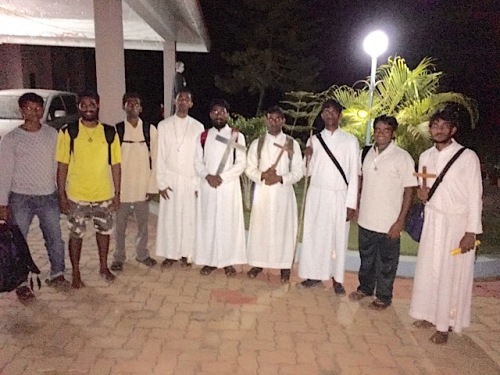 The following are excerpts from Fr. Tom Cassidy’s daily journal covering the days of Triduum through Easter Vigil:

MARCH 24 – This evening we will join the Holy Family Brothers as we begin the great three days of the Easter Triduum starting with Holy Thursday’s Mass with its rite of the washing of the feet.

After Mass and supper nine brothers will be walking 40 kilometers (24.8 miles) to the Gunadala Matha Shrine on the outskirts of Vijayawada._ They’ll leave after our evening meal, departing sometime after 8:30 pm. According to Br. Jesu Prasad Siddela, scj, it will take them between 12 and 15 hours. The brothers are all going barefoot. Pilgrims, both Hindus and Christians (and I’m going to guess Muslims as well) make pilgrimages in bare feet. This is done on a short journey or on even much longer ones than the 40 kilometers our brothers will be walking tonight.

Here at Christu Dehon Nivas we kicked off the Easter Triduum last evening with the outdoor Stations of the Cross. Several of the brothers constructed a large wooden cross that the brothers and Fr. Louis Mariano Fernandes, scj, (our rector) took turns carrying from station to station. As Fr. Mariano wanted to take his turn carrying the cross he asked me to lead the stations.

MARCH 25 – After supper last evening we wished our nine pilgrims well as they began their 40 kilometer hike to Gunadala Matha Shrine. It’s now going on 11:00 am on Good Friday and since we have not heard anything we can presume that no news is good news since Br. Jesu Prasad Siddela, scj, has my iPhone and can call if they need assistance.

Through the kind services of our novice master, Fr. McQueen Winston Savio Mascarewhas, scj, a community of sisters near the shrine has agreed to put our pilgrims up for the day. They’ll return tomorrow by bus and as our Holy Saturday service does not begin until 10:00 pm they’ve got plenty of time to make their way home.

Our Pilgrim Nine were not the only ones walking today. This morning the Carmelite community of the Edith Stein Monastery organized a walking Way of the Cross. Many of the religious communities, both men and women religious, chose to participate. Our local bishop, Jaya Rao Polimera, also took part, giving a brief opening meditation and prayer and then doing the same at the conclusion of the stations in front of the Carmelite chapel.

The stations began with someone dressed (including long hair, beard and crown of thorns) carrying the cross and from there, various individuals, including our own Fr. Mariano, carried it from one station to the next. The distance from the Holy Family Brothers to the Carmelites is about two miles (3.21 kilometers). It took us just over two hours to complete the journey.

MARCH 27 – Fr. Mariano and I, plus four of the brothers, took part in the Easter Vigil Service with the Holy Family Brothers community. The rest of our brothers were dispersed, a few at their ministry sites with the majority participating in the service at Amalodbhavi Matha Cathedral in Eluru.

After the blessing of the fire and Easter (Pascal) Candle we processed to the room used on Holy Thursday for the altar of repose. Here we would hear the Exsultet, The Great Easter Proclamation, sung before the Easter Candle. I look foreword each year to this beautiful song, and especially its lyrics.

Next in the liturgy are the Old Testament readings recording the history of salvation starting with creation. From there we again processed to the chapel but before entering we would hear, or better said “watch,” the Holy Family postulants for a second time act out the testing of Abraham (Gen. 22:1-18). For the young seminarians this is one of the highlights of the evening. After a fine reenactment (especially by lamb and donkey!) we all proceeded into the chapel where the rest of the liturgy took place, including the renewal of our baptismal vows.

Following the service we were all invited for cake and soft drinks. I was asked to give a toast and what followed must be a house tradition. Part of taking a sip included four phrases that you might call a little ditty. What made it impressive was it was done in all the languages used in the house. I counted nine, starting with the common (house) language of English and then Spanish, the language of the Holy Family Brothers coming out of Spain, and on to at least seven Indian languages.