SCJs come together in India

As we noted previously, Fr. Tom Cassidy, SCJ, is back in his second home: the District of India. Below are excerpts from his recent journal entries: 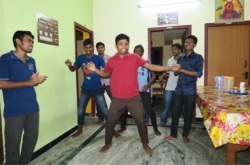 AUGUST 23, 2016 –– Last night the seminarians put on a short “cultural program” as it is called here. In our old seminary days we’d call it a convivium, while some would call it a talent show. The grand finale was led by Obed Nag from Assam who, along with his three Assam companions, managed to teach the rest of the group one of their Assam dances. Fr. Alex recruited this group last spring on a visit to Assam and recalled his experience of attending an all night dance at a local festival. Regular readers of my journals have often heard me say that Indian men like to dance and many of them are quite good at it. Most Indian movies must feature at least one grand dance routine reminiscent of the American films of the late 1930s and 40s.

The show took about 45 minutes as it would be an early start for those of us traveling to the Don Bosco Center that is about an hour by car from the Dehon Joythi community. Frs. Thomas Vinod, SCJ, and Michael Benedict, SCJ, said they’d pick us up at 6:00 am.

I set my alarm for 4:45 am as Fr. Alex said he’d have breakfast ready at 5:30 am. I should have guessed what he meant was he’d have some of the students make breakfast. Sure enough, by the time I had packed and opened my door two of them were busy in the kitchen and dining room putting things together for the three of us to eat.

I must confess I was a bit surprised when we drew near the center as it is one of the last places one would think would make a good location for a retreat center. We are quite near the ocean and very near the port so the area is surrounded by many factories with lots of trucks pulling containers either filled with goods for export or coming back with imports.

Upon our arrival we noted there were no assigned rooms so it was hunt for an available room. I found one, or rather someone found it for me, and as I was getting settled in Fr. McQueen Winston Savio Mascarenhas, SCJ, came to tell me they had a air-conditioned room for me. As it turned out Fr. Pradesh Kumar Richard, SCJ, was occupying it but the others threw him out and handed the keys over to me. Sometimes age does have privilege!

We’re now half way through the first day. This morning we heard a presentation on the state of the district by Fr. Thomas and this afternoon Fr. Michael will do the same for the fiscal health of the district. This evening I am with a three-man team to prepare the Mass. We agreed I’d be the celebrant, Dn. Pinto will do the introduction and gospel and Fr. Suresh Gottom, SCJ, will give the homily. 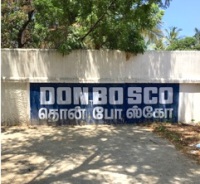 AUGUST 24, 2016 –– We are now into our second day at the Don Bosco Youth Center. I chose this photo as it clearly shows the Tamil Nadu alphabet spelling out the phrase “Youth Animation Center.” One of the complicating factors for Indians and non-Indians alike is that often each language has its own alphabet. This one clearly differs from Hindi for example, and certainly Telugu as well, the language that I am used to seeing spelled out in road signs and advertisements along the highways in Andhra Pradesh.

We are not the only ones using the center this week; along with us is a group of young men who are on retreat though we only see them in passing as our two schedules are very different

Last night was the first night we slept here and many in our group of 36 were complaining of how hard it was to get to sleep as their rooms were very warm. Some of them took to sleeping in the outdoor corridors. Remember this being a tropical climate there is less a need for indoor hallways and most of the foot traffic is handled much like we see at motels in the US, i.e., a covered outdoor walkway connecting rooms and wings of a building.

Our days are full and generally run from 6:30 am with morning prayer and Mass to supper at 8:00 pm with the chance for some recreation afterwards with most people heading to their rooms around 10:00 pm. We don’t have internet access nor TV reception so folks are left to their own devices. Last night card games were popular. 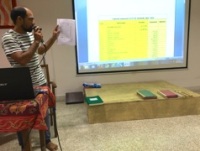 Most of our sessions have been presentations and as we look toward the end tomorrow we are now hearing from each of the communities concerning their activities of the past year as well as an accounting by the local treasurer. What is a bit different from a typical assembly in the US Province is that the account books for each house are open for inspection by any member and will be available until 9:00 pm this evening.

Tomorrow we’ll bring the assembly to a close as we should wrap up around 5:00 pm. I will be traveling back to the district house as we have a district council meeting on Friday to review the results of our assembly gathering and to try and put the final touches on the six year plan that we need to send to the general administration.

AUGUST 25, 2016 – Yesterday we heard from the community houses, i.e., formation programs, concerning the activities of the past year along with their hopes and dreams for the coming year. This morning it was the turn of the parish communities to do the same.

It is safe to say that all of our parishes are poor and in some cases are parishes we are building up from scratch. Many of the parishes have pastoral as well as social needs that the parish team would like to meet. Since the district has very limited resources and is dependent on support from the general administration it will take creative thinking to meet those needs.

All in all it was a successful gathering. Given the distances that separate various communities it is important to gather at events like this to renew the bonds of brotherhood that are so much a part of belonging to a religious community. It also was an excellent opportunity to hear firsthand from those responsible as to what is going on in the district and the ministries operated in the name of the district. There are lots of challenges pulling at the district but as I once read: “Every challenge is in reality an opportunity.”