The community welcomes Fr. Tom back to India

Last week Fr. Tom Cassidy returned to his second home: the District of India. There, he spends several months of each year assisting with the formation communities. While in India he maintains a daily journal. Periodically we will share excerpts from it on our province blog. The following is a snippet from one of Fr. Tom’s first journal entries:

Our usual breakfast routine was broken up this morning with a breakfast that would be well known to Americans: Rice Krispies and Muslix along with bananas and juice. I’ve never been able to find Rice Krispies in India though most other cereals are available so I brought with me a family size box for the students to try.

Today is a free day for the students and it started with late rising and breakfast at 8:00 am. I had to rise earlier as I had the 7:00 am Mass for the Holy Family Brothers, picking up my routine from earlier this year of celebrating Mass for the brothers on weekends.

One reason for making today a free day was all the activity of the past week in getting ready for and then hosting the district’s ongoing formation program. That ended at noon yesterday and then last night we all went to Sacred Heart parish Vempadu for the first Friday evening service that our students conducted. The service is done in a manner similar to a revival in the Pentecostal style — a lot of  “Praise the Lord Hallelujahs” thrown in from time to time. 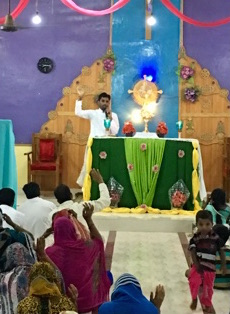 There is, of course, a Catholic twist to it all. The service began at 7:30 pm with exposition of the Blessed Sacrament followed by a praise and worship service. I call it the warm up act. Last evening it was led by Br. Jesu Prasad Siddela, SCJ (thirdrd year). This portion of the service ran about 45 minutes and is designed to prepare the congregation for the sermon. Last evening it was delivered by Br. Chitti Babu Nandipamu, SCJ (second year) who spoke for 45 minutes. While this was going on Fr. Michael Augustine, SCJ, heard confessions underneath the bell tower. The service ended with benediction but very different from what Americans experience. In this service the priest goes around to each person and blesses him or her with the monstrance. When the Blessed Sacrament is returned to the tabernacle and the priest leaves the alter there is no closing hymn. The people simply get up and leave the church. We finished around 9:15 pm and went from the church to the parish house for supper before heading home.

I don’t know all that well the history of the development of the Catholic Church in Andhra Pradesh but it certainly is the most Pentecostal compared to Goa or Kerala, two other areas of the country that I have spent time in. Kerala and Goa have a much bigger concentration of Catholics and that may have something to do with it. I have been told by our Andhra Pradesh brothers that the people have been heavily influenced by Protestantism where preaching is the central part of worship. Certainly in Goa and Kerala a homily of 15 minutes is the norm but here in Andhra it is generally 30 minutes or more.

One response to “Back in India!”