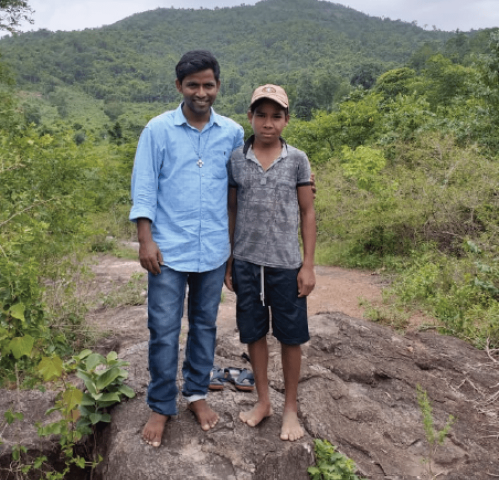 Br. Manish (left) with a friend in Odisha

Fr. Tom Cassidy continues to keep a daily journal during his time with our Dehonian community in India. Recently, he wrote about the district’s efforts in developing its first mission:

Br. Manish Nayak, SCJ, will shortly head to Odisha to help set up our first SCJ mission in his home state. In so many ways it reminds me of the early mission days of our German SCJs in the United States when travel was difficult and roads (at least paved roads) were few and far between. Manish leaves this weekend with our district treasurer as the advance party to begin to get things organized for the arrival next week of Frs. Michael Benedict, SCJ, and Vijaya Bhaskar Reddy Yeruva, SCJ, who are the first two assigned to our Bisaguda Mission.

To say the least, this is a remote area.

The diocese covers approximately 15,000 square miles. Out of a population of 5,407,895, there are 50,542 Catholics; less than 1% of the population. The majority, including those whom we will be serving, are classified as “tribals.” This is a special status in India that bears similarity to the status of Native Americans in the United States.

The diocese was established in April, 2016. According to Wikipedia, it has 23 parishes and 35 diocesan priests. To use my South Dakota analogy, the problem is distance and ease of travel more than the number of priests. This is a world Manish knows well as he is an Odisha native and will help for about the next six months in establishing our presence in this remote part of Odisha.

It is with this background that our superior, Fr. Michael Augustine, SCJ, asked Manish to give the talk at July’s recollection day. Fr. Michael asked Manish to speak on the topic of mission. Last Saturday at our American Breakfast in his honor I quipped: “Manish is our first missionary, and where is he going? Back home to Odisha!”