Fr. Bernie Rosinski, SCJ, is spending several weeks in the Philippines assisting the SCJ district with administrative duties as well as helping students in the international formation program with their English.  He continues to share his experiences in the province blog: 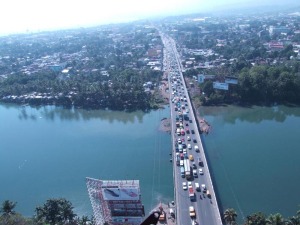 Instead of class this morning, my Filipina teacher counterpart (grammar) and I (pronunciation) went with our students to Xavier University (Jesuit) in downtown Cagayan de Oro to visit a museum on campus. The museum is hosting an exhibit on the culture of Mindanao island.  It was the equivalent of a “field trip” and I felt very much like a little boy.

Don’t misunderstand that last statement. I was not patronized or treated like a little boy. It was simply that every part of this experience was entirely new to me, as if I were a little boy. I had, for example, my first trip in one of those contraptions I wrote about earlier: the motorbike sidecar vehicle (except that the sidecar was not at the side but in the rear);  it took about half our crowd of 15 or so people so we went in two “motorella” (yep, that’s its name). It operates like a taxi and takes you where you want to go. It took us 15 minutes to get to the university.

There I learned a number of interesting facts: that the “George Washington” of Philippine indepence was born on Mindanao, that early on there were conflicts between “Moros” and Filipinos, that there were also serious and lasting conflicts between the Catholic religious orders that helped colonize the Philippines originally (and I haven’t been able to learn if they have ceased. . .), that weaving was an island industry and the colors, fabrics, and designs were very original. Beadwork was imployed in making clothing and I saw a woman’s blouse that took two years to make. I was reminded of the psalm that speaks of the wedding of Ahaz and Jezebel, noting the “pearls embroidered” into her wedding gown.

Then we visited the beautiful chapel on campus. A large painting of Christ leaving his tomb was featured on the wall behind the altar. The roof was high, the sides were totally open to the breeze, the pews had some people scattered about, praying I can only assume — though they might have simply been resting. From the chapel, where I took some photos, we left to have a “snack” — something the students had asked for in their evaluations which we got the day before: (1) outing; (2) snack; — both of which made me feel again like a little boy. The snack consisted of a sugared donut and a coke.

While walking to the donut shop the students walked around me like a bodyguard and even when I finished my snack and wanted to go outside and take pictures, two of them accompanied me. This was something else that contributed to my feeling like a little boy (I haven’t felt this good in years).

Finally, we were ready to return to the SCJ house. “Ma’am Jo,” (all Filipinos seem to have a single name by which they are called) and I were steered to a jipney (pronounced “jeep knee”) and we were home in about 10 minutes. What it cost and who paid for this venture I never learned. Still one more factor that left me feeling like a little boy.