The problem with English…

As noted previously, Fr. Bernie Rosinski, SCJ, is spending several weeks in the Philippines assisting the SCJ district with administrative duties as well as helping students in the international formation program with their English.  After a few days of teaching English he shares the following observations: 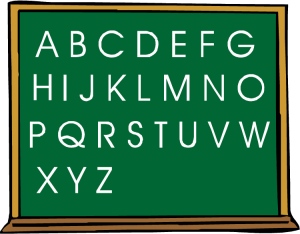 With my degree in applied linguistics in hand, I have felt for a number of years that teaching English as a second language faces a huge obstacle. That obstacle comes in the form of the Latin alphabet writing system.

It’s not the writing system itself; rather it is the fact that most languages that make use of it find an almost perfect one-to-one correspondence between the written Latin alphabet system symbols and their language sounds. Languages with written accents like French and Portuguese are able to modify that one-to-one correspondence to accommodate their additional sounds. When the following vowel sounds are written in the Latin alphabet, i.e., A, E, I, O, U, virtually all Western languages, except English, pronounce them identically.

Let me state as a given that English does a very, very poor job in making the Latin alphabet correspond with their spoken sounds. George Bernard Shaw recognized that and offered a monetary prize, still unclaimed, for anyone to come up with a system that would equate one English sound with one written symbol. Instead, all kinds of esoteric phonetic spelling systems exist that are too complex for anyone to learn properly.

To get to the point, because other languages are so successful in making their written symbol correspond to their spoken sound symbol, early on their speakers acquire a facility, a disposition, a tendency, a psychology (?) that leads them into thinking and acting that the way to learning a language, any language, is through reading, through the written Latin alphabet symbol. They actually believe that they can learn English in this way. What they don’t realize is that English is notoriously poor at making writing correspond to the spoken sound. Let me illustrate with an example. One sound (which I will not attempt to “write” here) has 12 different ways of appearing in written English (and I urge you to consider the contradictory patterns of writing): people vs amoeba; either vs niece; suite and sweet; key and sea; chamois and chassis; marry and she. Non-English people go nuts trying to learn to speak English from way it’s written. The problem is:  from their prior experience with their native language their very bones scream out to them that this is the only way to go.

The answer: repeating English sounds; learning English like babies do — by hearing, by using analogy for similar sounding words, by making mistakes in analogy application; by being corrected, either by oneself or by others. And after the sound system and sound patterns are learned, attempting to join the spoken word to the written word.

That’s the way I am working in the Philippines. We use the breviary with its cycle of morning and evening prayer psalms. I ask the students not to look at the book but to listen to what I am saying. I repeat several times and then I ask the students collectively to repeat what I said by picking up their psalm books. Then I will ask individuals to repeat the verse. Where pronunciation mistakes are made, I correct them. Oftentimes, the mistakes that are made result from applying native language reading patterns to the English sound; e.g. seeing “will” in writing, they will pronounce it “wee-l” because that’s the way the “i” is pronounced in their language: one letter, one sound.

With Vietnamese and Filipino speakers, I have two different groups because each comes from a different linguistic background. In attempting to speak English, they do so differently and thus reveal different problems. Here, I bless God for my linguistics training at Georgetown. In fact, I was able to discern two different dialects among the Vietnamese. When I asked them whether two individuals who were making the same English pronunciation mistakes came from the same area, they were able to say “yes” and I think my professionalism impressed them.  Hopefully, that will translate into greater cooperation.

I have learned that both Vietnamese and Filipinos have already studied English for a minimum of 10 years and some as many as 12 years. English is not one of their favorite subjects; there are other more important subjects in their curriculums and they devote limited time to these. Why squander precious time on English? Yet, they have to pass an English language exam to get into Xavier University here in Cagayan de Oro. They realize that and are extremely cooperative during this summer program.

3 responses to “The problem with English…”