Sampling the treats of Vietnam and the Philippines 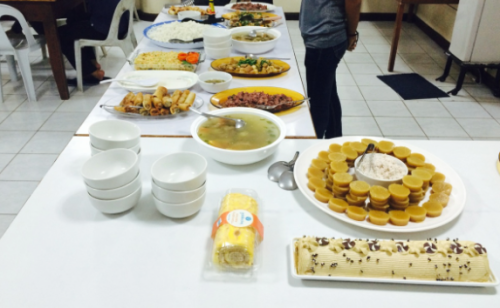 The many cultures of the Philippines and Vietnam

In one of his last posts from the Philippines Fr. Tom Cassidy writes about the community’s recent culture fair in which the foods and traditions of Vietnam and the Philippines were shared.

Our local cultural fair went off without a hitch and I’d say everyone went home full and happy. The event bears some similarities to the cultural fair that caps off the summer ESL program each year at Sacred Heart Seminary and School of Theology (SHSST).

The evening began with a brief presentation using tourist videos of the wonders and beauties of Vietnam and The Philippines. Our master of ceremonies was Br. Joseph Dien Tran, SCJ, who just returned from his Vietnam holidays was drafted by the group to do the honors. Joseph graduated from the English course two years ago when Fr. Johnny Klingler, SCJ, served as its instructor in American English pronunciation.

Although we only had two countries represented, their size and cultural complexities ensured that we would have a rich experience representing the islands of Luzon and Mindanao from the Philippines and the cultural diversity of the north, central and southern corners of Vietnam. Our eight Vietnamese students range from as far north as the Hanoi area (Vincent Le Tiep Van) to almost the southernmost tip of the Mi Kong Delta (Anthony Ngo Minh Cuong) and regions in between. 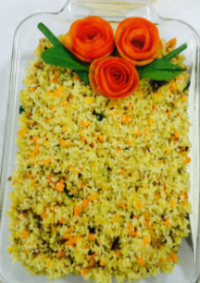 I’ve reported on several occasions of just how passionate Peter Nguyen Quoc Cuong has been about the cuisine of central Vietnam (Quan Binh Province). He’s been selling me the virtues of the Mi Quang Noodles since about the first day of class. Peter worked for four years in his brother’s restaurant and although much to my disappointment he did not make the noodles for our dinner he did produce a great dish of fried rice that as you can see was presented with a bit of flare. He made the flowers out of carrots.

Peter has promised me he’ll make the noodles before I leave on Saturday he’s waiting for one of the students to return on Thursday from the Dehonian Youth Mission who has a stash of Vietnamese noodles needed to properly make Mi Quang Noodles.

As for the other dishes we all enjoyed last evening the two representing the Philippines were made by Argol Chavez from Mindanao who prepared Bicolano. It’s made of coconut milk, pork and chillies and is served as an appetizer. We were warned it is HOT! July Zambrano from Mindanao made a dessert called Poto Cotchinta. It looks something like a flan and is served with shredded coconut. 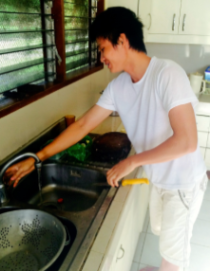 Every party includes some clean-up

I think everyone enjoyed the evening. I, for one, always like trying new foods and learning how different cultures both look at food and its role in their society. I always remember Bishop Virginio Bressanelli’s comment about Italians: “Italians,” he said, “are the only people I know who have turned eating into an art form.” I would tend to agree with him. Certainly Italians love nothing more then to sit around a table with good food, good wine and good conversation. I think to a certain degree that same love is part of many Asian cultures. 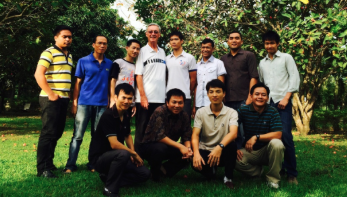 Fr. Tom with his students