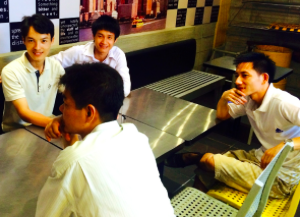 Some of Fr. Tom’s students out for a final pizza night with their teacher.

As noted previously, Fr. Tom Cassidy has been writing blog posts from the Philippines, where he helped with the English program during the past six weeks. This is his final post before heading to his next stop: Vietnam.

Tomorrow I’ll head to Vietnam for the last leg of my Asian journey. While I call this the last day in truth I’ll be here for most of tomorrow as my flight doesn’t leave until 22:10 (10:10 PM). I’m not sure why Cebu Pacific flies so late in the day — my return journey to Manila leaves Ho Chi Minh City (Saigon) at 01:00 (1:00 AM)! One advantage, especially on the return journey, traffic will not be as great a problem though Manila never sleeps and the roads are never really empty of traffic.

This morning I had two English Masses at a nearby parish of San Lorenzo Ruiz. Actually within a five to ten minute walk from our house I counted three nearby parishes. One of our students guided me to the parish, though with clear directions it would have been very easy to find. I’m told we often help out at this parish and I think it is our own territorial parish as well. We have used the parish church in the past for deacon and priests ordinations. 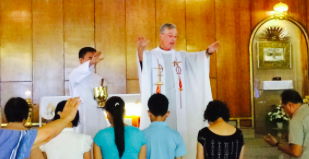 If I read the bulletin board correctly there is a Saturday evening Mass and three on Sunday. The first at 06:00 is in Tagalog and the others (08:00 and 10:00) are in English. As today was the first Sunday of the month what’s pictured here is a blessing on those who have June birthdays. It’s done just before the final blessing and announcements. The photo also gives a good picture of the style of alb/chasuble most priest where due to the heat.

I got home a little after 11:00 AM and looked in on the kitchen. Sundays the regular cooks have the day off so the students are responsible for the meals. Actually breakfast is on your own with everyone going in different directions either for pastoral work or off to a parish for Mass. The noon meal was being prepared by some of our Vietnamese students and the evening meal is in the hands of some of the Filipinos. While there are certainly similarities in their cooking styles there are also marked differences. Noodles play a much bigger role in Vietnamese cooking as does the use of vegetables. Rice is still the staple for both.

As the joke went in Cagayan de Oro so it plays well here too: At noon we’ll have fish and chicken and for supper we’ll have chicken and fish. Other meats will appear but not all that often and of the two pork probably makes it to the table more often then beef.

Fr. Tom writes adds a bit about the photo above:  “This street is not too far from our formation house in Cagayan de Oro and I often would walk it during my daily walks. I decided to take this picture for two reasons: (1) It shows the morning build up of clouds that often led to our afternoon thunderstorms. (2) It gives some idea of modern Philippine housing. Housing is one difference I noticed from my first trip in 1990. Both roads and housing have shown marked improvement over that time span. However, do keep in mind Cagayan del Oro is a large city and out in rural areas things can be much simpler.

I should also note that I could just as easily turned this camera in the opposite direction and shown shacks constructed of wood, metal and bamboo, or what I take to be bamboo. The same is true in Manila (or any other large city) along with nice housing, mansions even, not all that far away are clusters of slums and shacks. Poverty while less then what I saw in 1990 is still a reality for far too many.

One response to “Last day”